The virus is mutating: regular sequencing could help bring the pandemic under control

Bratislava, 11 March, 2021: Researchers from Comenius University Bratislava and the Biomedical Research Centre of the Slovak Academy of Sciences want to sequence up to 500 coronavirus-positive samples per week. Their plan is to monitor sequenced virus samples from all over Slovakia. They are now working to adapt laboratory procedures to increase sequencing capacity and to reduce sample processing costs. Fewer samples have been sequenced in Slovakia to date, than they plan to just this week.

"The goal may look ambitious but it is manageable with good organization, cooperation with regional authorities and sufficient financial support," says Professor of biochemistry Jozef Nosek from CU. Research groups of biochemists, molecular biologists and bioinformaticians from Comenius University, and virologists from the Slovak Academy of Sciences, have been working on the sequencing of SARS-CoV-2 virus genomes for a year. Genome sequencing is basically about determining the order of the letters in a DNA strand.

Using this process, scientists can monitor any changes to the virus genome, i.e., they watch the virus evolve in real time. The genome of the virus changes gradually at a rate of about two mutations per month, and these mutations affect its properties. Changes in the sequence may also adversely affect diagnostic methods, like PCR or antigen tests. Monitoring of mutations can therefore help to determine when and how to adapt diagnostic procedures so that tests are able to detect individuals infected with different virus variants and quarantine the people early.

"If we didn't do this the virus could gradually change so much that we would no longer be able to identify infected individuals using the tests we currently have. This would enable the virus to spread much faster and cause more deaths," explains Jozef Nosek from the Faculty of Natural Sciences of Comenius University. At the same time, knowledge of virus variants circulating in the population allows better selection and optimisation of vaccination strategies and helps decide when new versions of vaccines need to be developed and deployed.

Researchers from CU and the SAS have identified several virus strains in our country. These include the Czech, the British and the South African variants, but also various other strains. Once the samples have been sequenced, it is fairly easy to place them in a particular group. "Each of these variants has specific mutations at certain points and all we have to do is see if these mutations are present in the sample. The genomic sequences of the virus are then sent to the international GISAID database," explains Associate Professor and bioinformatician Broňa Brejová from the Faculty of Mathematics, Physics and Informatics of Comenius University.

The sequencing of virus samples makes it possible to find out where the variant originated, as well as how it spreads to different parts of the world. The Czech variant was prevalent in our country before Christmas 2020 but by the beginning of March 2021 the British strain already accounted for 90% of infections nationwide. In January, after researching the British variant of the virus in cooperation with the team of Dr Boris Klempa from the Slovak Academy of Sciences, scientists participated in a validation of a test for the British variant developed by Pavel Čekan's MultiplexDX.

The virus, however, is constantly mutating and new variants of it will continue to emerge. "That's why most of the population needs to be vaccinated. The sooner we do it, the less time and opportunity we give the virus to mutate into new, more dangerous forms," says Jozef Nosek.

Rector of Comenius University Marek Števček also supported the research of the Slovak scientists: "One of the most important challenges of today is to translate scientific results into concrete and meaningful epidemiological measures. The results obtained through various diagnostic approaches, including sequencing, but also mathematical modelling of the virus spread and through other research, can be of great assistance. The work of the scientific teams of Comenius University gives us hope that we can bring the pandemic under control." 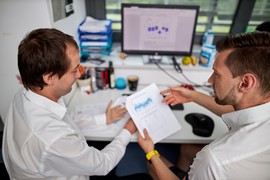 The database "GISAID" acquires genomic data about viruses of influenza and Corona Virus. Sequences of SARS-CoV-2 samples gathered in Slovakia are also sent to this international database used by epidemiologists around the world. In the picture, you can see a genealogical tree of the virus with its strains (mutations) that had originated later. On the bottom, there is an original "Chinese" strain 19A, that was discovered in December 2019. You can also see Slovak sequences worked on by our scientists. Source: https://nextstrain.org//