Bratislava, 19 March 2021: They decided to leave their aquatic life behind and moved to dry land. Amphibians which underwent this radical change 340 million years ago exhibited several anatomical transformations. Their fish fins morphed into tetrapod limbs and breathing organs changed their function, but a crucial change affected the way in which their blood cells formed. An international group of scientists with the participation of Jozef Klembara, an evolutionary biologist from Comenius University Bratislava, discovered at what point in time and in which group of vertebrates blood cells started to be produced in bone marrow. Their work was published in early March in eLife, one of the most respected "open access" magazines in its field.

For tetrapods, life on dry land meant that their organs associated with respiration, reproduction or hearing had to transform. Another equally significant adaptation affected the formation of blood cells. Blood cells make up almost half of the blood content and include platelets, red and white blood cells. In aquatic vertebrates, blood cells are produced in organs - the kidneys or the liver - but in most tetrapods they are produced in the long bones like the humerus or the femur. Until now scientists thought that haematopoiesis (production of blood) in limb bones appeared before the evolution of fish into tetrapods.

"Together with colleagues from Sweden, France and Australia we decided to find an answer to this long-standing dispute among scientists. We wanted to know when haematopoiesis began to migrate from the organs of aquatic vertebrates into long bones. Our work builds on the study of evolution of long bones and their growth strategy in Permian tetrapods - seymouriamorpha - which are the earliesta amniotes. Their present-day vertebrate descendants include birds, reptiles and mammals,” says Jozef Klembara from the Faculty of Natural Sciences of Comenius University.

By studying long bone microarchitecture of early amphibians (the ancestors of reptiles) as well as the earliest reptiles, they discovered that Permian tetrapods were among the first to exhibit centralised marrow organisation in their long bones. Their limb bones were examined using high-resolution X-ray microcomputer tomography in Grenoble. "In our study we used fossils of early tetrapods, including individuals of the genus Discosauriscus originating from excavations in the Boskovice Basin in Moravia, which are stored in the Natural History collection of the Slovak National Museum in Bratislava. The species Seymouria sanjuanensis I borrowed from the Pittsburgh museum,” says the evolutionary biologist from CU Jozef Klembara.

This discovery confirmed that haematopoiesis did not migrate to bones until the Permian, millions of years after tetrapods evolved from amphibians. “Bone marrow, in which blood cells form, arose gradually in the cavities of the long bones. The first tetrapods, in which bone marrow cells were identified, are from a much later period - the Permian,” explains Jozef Klembara. The researchers believe that the formation of blood cells may have migrated from internal organs to the bones because the newly created blood cells are better protected in the bone cavities from the harsh conditions on dry land, such as ultraviolet radiation or extreme temperature changes. However, this hypothesis needs to be further investigated. 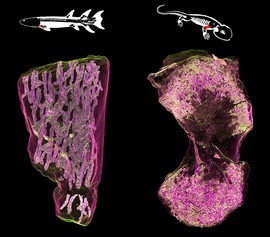